I’m sure that most of my readers aren’t familiar with the Shinto religion. In fact, most of the people I’ve spoken to aren’t aware of its existence. During my time in Japan, I was fortunate enough to visit one of the holiest religious sites- famous for over ten thousand vermillion gates that lead up to the summit of Mount Inari. Dating back to 711 AD, the Fushimi-Inari Taisha, a Shinto shrine, is one of the most popular tourist attractions in Kyoto city.  If we are to believe Dr. Google, Kyoto receives more than 20 million tourists each year and is expected to hit an alarming  40 million by the year 2020!

So what exactly is Shintoism? Since I am no expert, I will attempt to keep it brief and simple. Before the arrival of Mahayana Buddhism from Korea in the sixth century, the Japanese worshipped different forms of nature and were organised into cults known as Shinto. Unlike Judaism and Christianity, these cults were highly localised and lacked a centralised faith. These cults worshipped different spirits of nature and constructed religious shrines all over the country. This particular shrine is dedicated to the deity Inari Okami, who is also the god of rice. Later, under the orders of the Japanese government, Shintoism was merged with Buddhism.

What makes this site special, is the existence of thousands of brightly coloured torii gates that are dedicated by businessmen in the hope of receiving good luck and fortune. On taking a closer look, one can see the names of donors written on the gates in the traditional Japanese script. On New Year’s Eve, the shrine is full of pilgrims seeking divine blessings from the deities. Today, owing to its immense popularity, the place sees visitors from all over the world and is more of a museum than a religious site(much like St. Peter’s Basilica). 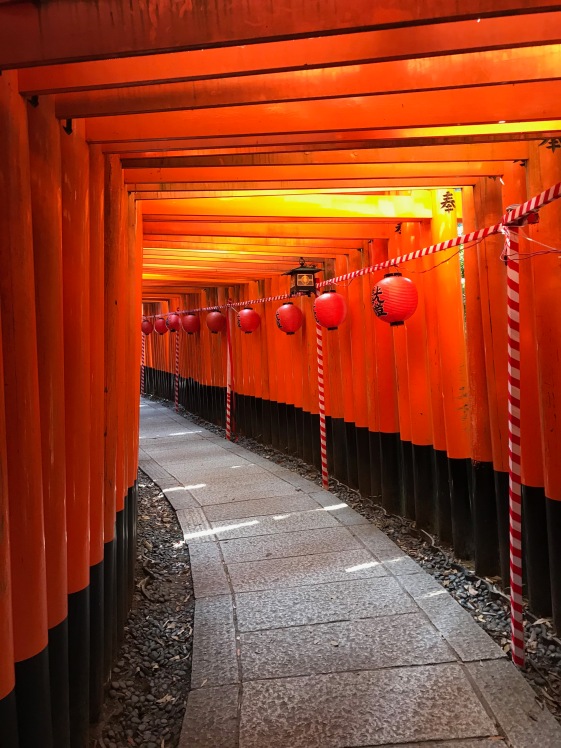 I was determined to stay far from the madding crowd and reached the place by 8 am in the morning. Proud of my decision, I managed to get some nice (and empty) shots of the torii gates. It was 39 degrees and I thought it wise to leave the mountain climb for a cooler day.  Thankfully, I managed to leave the shrine well before the arrival of the selfie obsessed crowd. 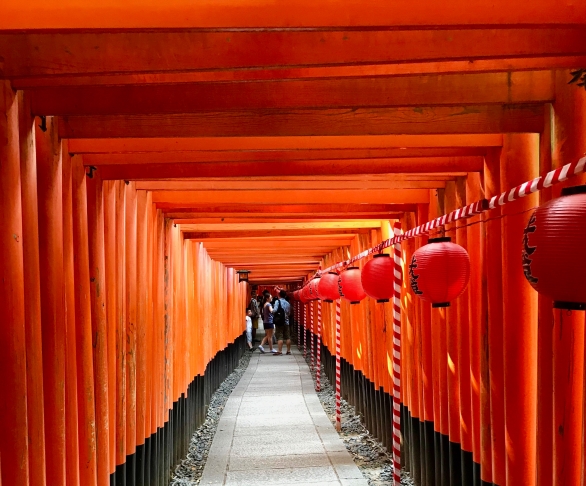 If you’re interested to know more about the influence of Shintoism and Confucianism in Buddhism, refer to the link below.

20 thoughts on “The Gods love Orange”