At Sedlec Ossuary, one is left to dwell in the presence of the inevitable. 40,000 – 70,000 human skeletons adorn the small yet impressive Roman Catholic chapel at Kutna Hora, less than an hour’s drive from Prague. It was the first time I had ever laid eyes on something so different, so bizarre and so astounding! On stepping forth into the church, one is pulled into a world governed by its own laws – inhabited by the ones long dead – where the skilful arrangements of human skeletons challenge and redefine the steadfast definitions of Art, Architecture and Beauty. In the safe havens of the chapel, the human bones take many forms and create an ambience that is a concoction of awe, wonder, innovation and an artistic freedom that transcends everything that is ordinary and commonplace.

The history of this chapel dates back to the thirteenth century when a Cistercian abbot was sent on a pilgrimage to the Holy Land. As was the custom of those days, he brought back with him a jar of earth from Golgotha, a place where the Lord was crucified. By the end of the fifteenth century, a chapel was constructed on the site where the earth was spread and soon enough, people sought to be buried in those very premises. The history of Europe is bloody and the kingdom of Bohemia was not spared from the battles and conquests led by the ambitious kings, emperors and warlords. The many victims of the Hussite wars and the infamous Black Plague of the fourteenth century find their final resting place in the chapel.

To me, the church of Bones at Kutna Hora is original, enticing and much more appealing than the catacombs at Paris, Rome or Vienna. The interior of the church is embellished with bones from every part of the human body. A giant chandelier lies at the heart of the chapel and is one of the most photographed and uniquely designed objects I have ever seen. The very concept of using bones to create something so spectacular must have been a lot of effort on the part of Frantisek Rint – a woodcarver who was allotted the strenuous task of creating a masterpiece out of thousands of body parts. The end result is indeed magnificent! It was a sheer joy to observe, analyse and appreciate the carefully arranged bones of the enormous chandelier. The intricately designed skeletal parts held long slender candles that flickered in diffused sunlight and formed moving silhouettes of unidentified life-forms on the white-washed walls of the chapel. It was hauntingly beautiful. 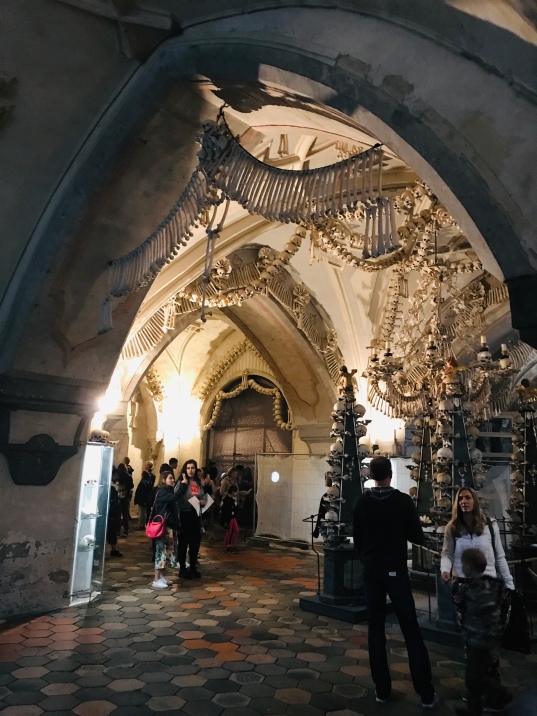 The altar of the chapel had a medieval touch to it; a lone candle stood in front of the crucifix. Perhaps it was my brain playing tricks but for a moment, I felt like I had traveled back to the middle ages. Neither the disrespectful crowd nor the continuous shuttering of the camera could break the trance of the captivating, unkept and the strangely revered altar with little or very few sacred objects from the vestry.

The coat of arms of the Schwarzenberg family is equally impressive and was constructed by Rint whose signature with bones can be found inside the chapel. At the bottom right corner, there is a bone figure of a raven pecking out the eyes of a Turk. The unusual decor of the chapel leaves its visitors with a queer feeling of walking in the midst of a cemetery of the adorned dead.

The Bone Church at Kutna Hora reverberates the Christian message that advocates for the equality of humans in the sight of God. Once striped bare, the differences are none.  In troubled times, irrespective of one’s religious or non-religious affiliations, the greater message conveyed by the indistinguishable piles of bones holds true.